WebSharper 4.5.9 is now available on NuGet, and as a vsix installer on the WebSharper website.

The release notes are also found on GitHub.

This gives a nice new alternative of constructing plain JS objects instead of New [ "A" => 1 ] or JS.Inline("{A: $0}", 1) or using a record/class type annotated with Prototype(false).

option<_> and voption<_> valued fields on anonymous records are automatically transformed to and from existing/missing JS properties:

This helps storing the values in minimal form, while keeping the full type safety of F# code. 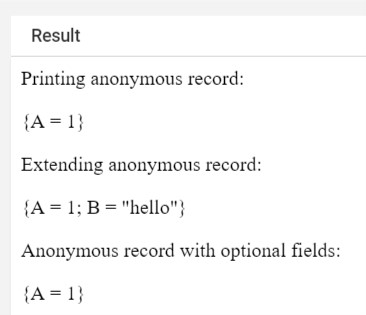 Opt out of templating transformations

By default a ${Name} in a WebSharper.UI template file is treated as a hole to be filled. Including this verbatim is now made easier with new attribute ws-preserve that excludes children of current node from being interpreted for template holes and ws- attributes and nodes.